PHOENIX – Dillon Clark-Oden started playing dodgeball at a local Jumpstreet Indoor Trampoline Park five years ago, just for fun. He never imagined it would take him around the world and turn him into a professional athlete.

This is the game of your youth, on steroids.

And Phoenix is home to some of the country’s best.

In dodgeball, teams of six players try to eliminate opponents by throwing a 7-inch, 4.9-ounce foam-filled polyurethane ball and striking the opposing player. When all of one team’s players are eliminated, that is the end of a set. A point is awarded for winning a set. Teams play as many sets as possible in a 40-minute match, divided into 20-minute halves.

If even one player is “alive” when time expires in a half or the match, the teams continue to play until the set is complete. Teams can have up to 12 players on the roster, but only six players are “live” during a given set.

An estimated 30,000 to 50,000 adults play organized dodgeball, with 3,000 to 5,000 participating regularly at a high level, according to a report by USA Dodgeball, the governing body of the sport in the United States 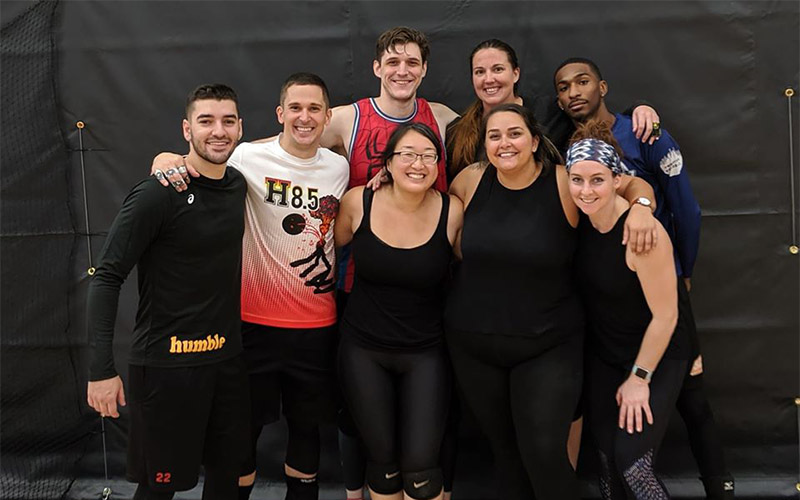 Dodgeball is growing locally in Phoenix because of leagues such as Cactus Dodgeball, which helps with the sport’s exposure by encouraging the public to come out to open practices where they can learn the basics.

“People just need to watch us play,” said Katie Sanchez, a Team USA Dodgeball player. “I think that visual impact, especially in person, translates the best that way. We have a lot of social media stuff happening with our league that players just love, and I know that people outside of dodgeball just love, and are really getting involved in.”

Orlando Huicochea, founder of Cactus Dodgeball, said his passion for the sport drove him to create a league that anyone can join to learn the game and potentially raise their play to a professional level.

“Since it’s started, I feel like it’s been getting the exposure that I strived for when I first created the league,” Huicochea said. “I just want the sport to keep growing, and I want it to keep growing even more here (in the Phoenix area).”

The ultimate goal is to legitimize dodgeball as a sport – one that is much more than just launching balls as hard as possible. Speed, agility and strategy all play a huge role in the fast-moving sport when competing at the highest levels, players say.

“When you watch it, you see the real athleticism that it takes to play,” Sanchez said. “We have athletes who would be great athletes in any sport. When you’re watching, you see all those skills. They’re jumping, they’re diving, they’re running fast, they’re throwing hard and those are all the things you need for pretty much any sport.”

Cactus Dodgeball’s own Dillon Clark-Oden, Andrew Ketchum, Rachel Rodia and Isidro Perez are among those on Team USA who have found national success. (Photo courtesy of Cactus Dodgeball)

Like Clark-Oden, Andrew Ketchum started playing dodgeball at trampoline parks and was recruited to play in tournaments. That led to a Team USA tryout.

“Team USA is the ultimate honor for me,” Ketchum said. “It’s what I work for all year long. All the dodgeball time potentially that I do is all working toward the goal, which is the U.S. Team, and I’ve been doing it for four years now.”

Each Team USA prospect is individually evaluated and selected by a group of eight veteran scouts at the USA Dodgeball Combine. There, athletes are assessed on skills that include speed, accuracy and agility as well as intangibles like team chemistry, sportsmanship and leadership.

“Even at our combines now we have speed drills, throwing drills,” Clark-Oden said. “We have to go on the rush to grab the ball. We have times and everything for it.”

Combines are scheduled around the country each year and determine the final men’s and women’s Team USA rosters for the World Dodgeball Federation Championships.

Ketchum said he has made lifelong friends competing with Team USA, and they share the same purpose, which is to build the sport to the highest level possible.

Rachel Rodia started playing dodgeball eight years ago with a league in Avondale and her career took off from there.

“I started playing locally, which turned competitive and next thing you know, I’m traveling everywhere,” said Rodia. “I have been part of Team USA since 2016 and it’s been an awesome, fun ride for the last four years.”

Entering the tournament, the U.S. men’s and women’s teams had collectively earned 12 team medals in the last seven years at the WDBF World Championships.

USA Dodgeball officials hope the sport eventually will be added to the Olympic Games.